Here is a selection of my clients, each case studies picks up on a few parts of their treatments, giving an idea of some of the areas that benefit from massage and energy therapy. 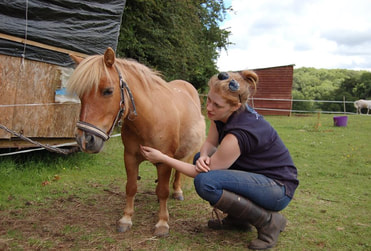 Louis is a 9hh Shetland pony, gelding who is 16 years old. Louis is retired which is partly due to bony changes in his shoulder which initially caused severe lameness, x-rays showed that the socket joint was not big enough which was limiting Louis range of movement.

​Louis had a large discrepancy in the size of his pectoral muscles and his right shoulder was extremely underdeveloped due to his reduced movement caused by the bony changes. His fascial features also weren't symmetrical which could suggest tension through his poll, Louis' hips were also not in line so I would be expecting tension through his hindquarters. They'll be tension along the stress point cycle which will be effecting Louis' physically and psychologically as his muscles will not be working efficiently and effectively.

​
When I started working on Louis' pectoral muscles he wouldn't let me apply any pressure to his left side due to the amount of discomfort he held there. I gently held my hand over the area, this will still warm up the area, encouraging blood flow and helping to release tension. Louis became very relaxed while I was doing this and I was then able to apply light pressure.

On Louis' right side, he was holding tension in the Cervical Trapezius, this muscle’s insertion is at the Scapula and works with the Rhomboid to raise the Scapula. As Louis has his shoulder issues the Cervical Trapezius is likely to be having to work harder to move the shoulder. Once warmed with effleurage, I then began kneading. This boosts the circulation and separates the fused muscle fibres which were causing the tension in the muscle.

Working on the stress point of the Longissimus Dorsi and Gluteal meeting point on Louis' right hand side, I used the kneading technique to break down the fused muscle fibres. Working on this cleared the stress point and in turn loosened off the Longissimus Dorsi and Gluteal muscles. Using effleurage to move down to the Tensor Fascia  Latae, I found a trigger point within the body of the muscle. To clear this I used some thumb kneading to break down the fused muscle fibres and then effluerage. I then applied the skin rolling technique across the hindquarters to increase the elasticity of the skin tissue. Louis’ skin had felt quite tight before treatment over his hindquarters, as the muscles were full of tension the blood flow, and therefore oxygen and nutrients getting to the skin would have been reduced for quite some time. The skin rolling technique will have loosened this off and assist in preventing in it getting tighter. After skin rolling, followed by effleurage I then used the vibration technique. This works in conjunction with skin rolling, it targets the deep muscle layers and improves the flexibility of the muscle fibres in the deep layer. By pairing both of these techniques together, over the hindquarters, it released the last of the tension held in the Gluteal and Tensor Fascia Latae, leaving Louis’ right side in a much more relaxed state.

I used a range of techniques throughout Louis' treatment to increase his mobility and flexibility, increasing the circulation and stimulating the lymphatic system which would remove the toxins stored in the muscles.

On finishing Louis’ massage I left him to process, he had become extremely relaxed, head hanging very low and eyes nearly closed. After a few minutes he walked away and had a very large stretch, which went through his back he followed this up with a wee, this is fantastic as it’s showing all the toxins which had been flushed from the muscles were working their way out of Louis’. 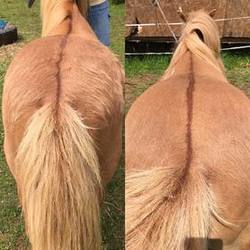 ​This image shows Louis’ hip alignment before and after treatment. You can notice the difference in positioning, particularly because of his dorsal stripe. The left hip is further forward and higher, you can also see how this is effecting the muscles through his back, leaving him twisted. You can also notice that before treatment his coat is looking quite dull, compared to after treatment where the massage techniques I chose boosted the blood flow to his skin and improving his coat. 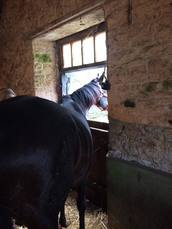 Moony is an ex-point2point horse, having completed eleven races in his five year career, he retired from racing following a nasty fall in his last race. He then went to a hunting home for two season, he has been with his current owner for just a year and is now mainly hacked, although his owner would like to take him out to some unaffiliated dressage competitions.


I began Moony's treatment with the Bladder Meridian technique. As Moony had quite a demanding start to his ridden life and is fidgety and alert to his surrounds I thought completing some work here would help clear any energy blockages which could be having a psychological effect. I started at the withers as Moony is head shy and thought starting higher may make him uncomfortable. He did continue to eat his hay whilst I worked along the Bladder Meridian but his eyes did become softer and he did slow down his eating. Once I was at the lumbar end of Moony’s back I felt quite a blockage and held my hand here for a few minutes. I had a sense of anxiety and worry here, Moony did walk away from me and put his head over the door, which I took as his release. I worked along the Bladder Meridian both sides but didn’t get many more releases, his eyes did remained droopy though so the energy work did help him become more relaxed.


All the muscles in Moony's neck were holding tension and there was not much elasticity in his skin. To help with this I did use the skin rolling technique to loosen it off and it would also help boost the circulation. This did help improve the movement in the muscles in Moony’s neck but the trigger point in the Splenius muscle still remained. I used effleurage to drain the toxins and then I applied the thumb kneading technique. I began gently as Moony did move away slightly from the pressure. Once I was able to get deeper into the muscle the fused fibres became more relaxed. To finish off I used effleurage then into wringing for each muscle to manipulate the tissue which would allow the muscles to relax further, changing to effleurage moving down to Moony’s shoulder. I used skin rolling as I had along Moony’s neck, to loosen the skin over his shoulder as this was quite tight. After some effleurage the trigger point within the Tricep had become less showing the skin rolling had improved the circulation and began to break down the fused muscle fibres. After some effleurage I applied some gentle thumb kneading into the trigger point which then broke down fully very quickly, so to drain the toxins released I used effleurage.


Once the muscles were warm, I used the shaking technique over the whole of Moony’s hindquarters to stimulate the circulation and encourage the lymphatic flow during the massage, this would also continue to have an effect after the massage. After using effleurage I then used the picking up technique down Moony’s hamstrings to drain the toxins, the whole muscle had become quite tight so this technique would separate fused fibres. Doing this loosened the muscle and allowed the tissue to become more flexible. I then applied a lot of effleurage to this area, I believe a lot of toxins had been stored in the hamstrings so the effleurage would be sure to encourage the flow of these toxins. Continuing the effleurage back over the hindquarters I then focused on the trigger point in the Tensor Fascia Latae. The muscle tissue had become looser, using the thumb kneading technique to loosen off the trigger point, I was able to go quite deeply into the muscle. I then used further effleurage and the hacking technique, this works with a stimulating effect on both physical and psychological levels, finishing with effleurage.

A word from Moony's owner following treatment: "Alice was amazing with my ex racer, very considerate and compassionate in her knowledgeable treatments!"